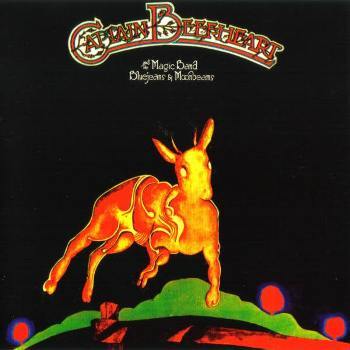 When the Captain went "further than he had ever gone", but not in the way you'd hope for.
"This is the Beefheart album where he writes love songs like nobody else."
— Kate Bush, who ranks Bluejeans & Moonbeams among her 10 favorite albums of all time, according to a November 27 - December 10, 1980 issue of "Smash Hits Magazine".
Advertisement:

Bluejeans & Moonbeams is a 1974 album by Captain Beefheart. After his Magic Band had left him Beefheart was forced to record this album with a group of session musicians. Much like its predecessor Unconditionally Guaranteed, this album had a Lighter and Softer sound than Beefheart's usual Avant-garde Music roots, though more comparable to a late night romantic atmosphere. The record is further notable for featuring a cover of a JJ Cale song, "Same Old Blues", Beefheart's first cover since Robert Pete Williams' "Grown So Ugly" on Safe as Milk (1967).

Yet, just like "Unconditionally Guaranteed" it failed to become a bestseller, got awful reviews and even alienated his loyal fans. To this day many Beefheart afectionado's refuse to acknowledge "Unconditionally Guaranteed" and "Bluejans & Moonbeams" ever happened and consider those to be his weakest effort. Even Beefheart himself would later perceive both records as an Old Shame and advised everybody who bought them to go to the store and ask their money back.

Interestingly enough, despite its atrocious reputation, Bluejeans & Moonbeams did inspire some covers. The White Stripes covered "Party of Special Things to Do" on their 2000 EP of that title, which also features covers of other Beefheart songs such as "China Pig" note  from Trout Mask Replica and "Ashtray Heart" note  from Doc at the Radar Station . "Observatory Crest" has been covered by Whipped Cream note  On their 1992 album Tune in the Century , Mercury Rev note  On the American Limited Edition bonus disc of their album The Secret Migration (2005) and Snow Patrol note  On their mix compilation album Late Night Tales: Snow Patrol (2009) . As mentioned in the title quote Kate Bush is a huge fan of this album too.

Party of Special Things to Trope: