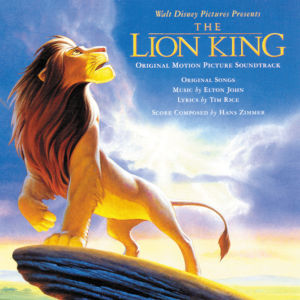 Can you feel the love tonight?
It is where we are
From the day we arrive on the planet
And blinking, step into the sun
There's more to be seen than can ever be seen
More to do than can ever be done

Some say eat or be eaten
Some say live and let live
But all are agreed as they join the stampede
You should never take more than you give
—"Circle of Life" as performed by Elton John
Advertisement:

The Lion King: Original Motion Picture Soundtrack is the soundtrack album for the 1994 Disney animated film The Lion King. It was released through Walt Disney Records on May 31, 1994, two weeks prior to the film.

While working on the soundtrack for 1992's Aladdin with Alan Menken, Tim Rice was invited to write songs for this film as well. He asked Disney to find someone to assist him, as he didn't want to work on such a project alone. Menken was unavailable, since he was already committed to Pocahontas. After being rebuffed by Benny Andersson, also due to prior commitments, Rice suggested English singer/songwriter Elton John.

John accepted the challenge, seeing it as a chance to attract adults to his music by writing songs that the kid audience could relate to. He decided to take his influence from 1967's The Jungle Book.

Meanwhile, composer Hans Zimmer worked on the orchestration for the film, taking heavy cues from African music. He would enlist the assistance of South African composer Lebohang Morake, also known as Lebo M. Four pieces of the orchestral score would be included in the soundtrack album: "This Land"

The soundtrack, like the film it came from, was an enormous success. It went ten-times Platinum in the United States, and would become one of the first albums to be certified Diamond by the RIAA when it was instituted in 1999.note It's currently the only Disney soundtrack to earn Diamond certification. It would be in the Top 10 of the year-end Billboard 200 album chart in 1994 (#4) and 1995 (#10), and would finish at #21 on the decade-end Billboard 200 album chart for the nineties.

John's versions of Can You Feel the Love Tonight and Circle of Life would both see considerable airplay, and both would be hits on the Billboard Hot 100 and the UK pop chart.

The soundtrack would inspire the 1995 supporting album Rhythm of the Pride Lands. This album included many original compositions by Lebo M., including renditions of "Hakuna Matata" and "The Lion Sleeps Tonight"; and a cut song, "Warthog Rhapsody", sung by Nathan Lane and Ernie Sabella. Rhythm was a limited edition that sold out its original run of 1 million copies, being certified Platinum by the RIAA, though it is now available digitally. Its leadoff track, "He Lives in You", would go on to be the intro song for the 1998 direct-to-video sequel, The Lion King II: Simba's Pride.

A new edition of the soundtrack was released in 2003 to correspond with the film's special edition release. It adds in "The Morning Report", from a restored Deleted Scene, and a remix of John's performance of "Can You Feel the Love Tonight". There is also a sing-along version of the album, which has separately gone double-Platinum in the United States.

Another new edition of the soundtrack, The Legacy Collection, released in 2014. This definitive edition of the soundtrack, released on two discs, includes over 30 minutes of previously unreleased score. It also includes a number of demo tracks and the deleted song "Warthog Rhapsody," which originally saw release on the album Rhythm of the Pride Lands.

As an interesting aside: the soundtrack for The Lion King was the first album released during the Nielsen SoundScan era (since 1991) to sell 1 million copies in the vinyl format, reaching the milestone in 2014.

Keep in mind, the 2019 version of The Lion King has a separate soundtrack.

Tracks added in the 2003 Special Edition

"Free to trope around all day:"