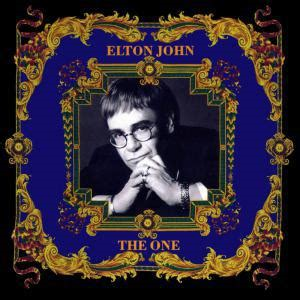 When chances breathe between the silence
Where sex and love no longer gel
There's a hungry road I can only hope's
Gonna eat me up inside
There's a drifting spirit coming clean
In the eye of a lifelong fire
Tell Monday I'll be around next week
I'm running ahead of my days
In the shotgun chance that scattered us
I've seen the error of my ways
"Runaway Train"
Advertisement:

After trying and failing to go sober on his own after producing Sleeping with the Past, Elton finally went into rehab in 1990 to deal with decades of substance abuse and bulimia. As he battled his demons, others he supported were losing their battles. Ryan White, an American HIV patient whose struggle was supported by many celebrities, died of AIDS in April 1990.

The other shoe dropped in November 1991, when one of Elton's friends, fellow English musician Freddie Mercury, also died of AIDS.

Originally titled "Song for 1992", it became "The Last Song", a ballad about a father making peace with his gay son, who was dying of AIDS.

The album in general was more somber than recent works, but still had plenty of warmth to it. It was well-received, again hitting #1 on the Billboard 200 album chart. It was stymied at #2 in the United Kingdom, stopped for three weeks by the same album, a greatest hits album by Lionel Richie. It would go double-Platinum in the US, and Gold in the UK.

"Runaway Train", a duet with Eric Clapton, would be featured on the soundtrack for the 1992 film Lethal Weapon 3.

The album was remastered in 1998, with two bonus tracks added.

Bonus tracks from the 1998 remaster

"We're gonna get back to the simple tropes again:"