Music / Sleeping with the Past 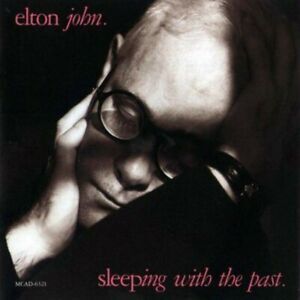 You're proud to love him, it's a foolish sign
You're a broken heart at the scene of the crime
When the shades are drawn
And the light of the moon is banned
And the stars up above
Walk the heavens hand in hand
There's a shady place
At the end of the working day
Where young lovers go
And this hot little trio plays
"Club at the End of the Street"
Advertisement:

Believing they were on to something following Reg Strikes Back, Elton and writing partner Bernie Taupin drew some inspiration from Billy Joel, and decided to tap into some R&B for their next album. He was also attempting to finally sober up after the wakeup call that was his 1987 throat surgery.

He would admit later that he barely got through recording sober, and quickly went off the rails again. He collapsed on-stage during the first week of this album's promotional tour.

Despite this, his songs did better initially in the US. The album spawned four singles: "Healing Hands", "Sacrifice", "Club at the End of the Street", and "Whispers". The first three were all hits in the US. But it would take an early 1990 re-release of "Healing Hands" and "Sacrifice" together in the UK for them to be propelled to #1 there, becoming his first solo #1 single in his home country.note He previously hit #1 in the UK with his 1976 duet with Kiki Dee, "Don't Go Breaking My Heart".

Falling off the wagon after the album's production would reverse some of Elton's personal triumphs since his throat surgery. He would go to rehab in 1990, hoping to end his substance abuse problems once and for all before they ended him.

Extra tracks from the 1998 remaster