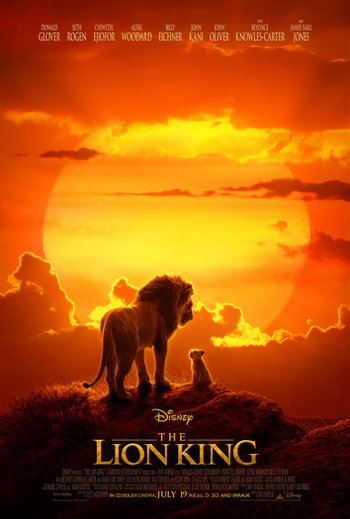 "You must take your place in the circle of life."
Simba: Please, don't leave me again!
Mufasa: I never left you, and never will. Remember who you are.
Advertisement:

The Lion King is the 2019 photorealistic computer animated remake of the 1994 Disney animated epic The Lion King. It was directed by Jon Favreau, director of 2016's wildly successful live-action/CGI adaptation of The Jungle Book, and brought to screen using the same highly photorealistic CGI techniques by Moving Picture Company as that film employed. The screenplay was written by Jeff Nathanson, with The Lion King franchise veterans Thomas Schumacher (a producer of the original film) and Julie Taymor (director of the Broadway adaptation) serving as executive producers. The film was released in the United States on July 19, 2019,note The international release began in China on July 12. and is currently the highest-grossing animated film of all time, surpassing Frozen for the title, though it's considered still part of the current trend of live-action remakes by Disney, and Disney itself does not recognize the record as such for this film, claiming that Frozen II (released later in the same year) gets the title.

This version of The Lion King, like the original, is the story of Simba, crown prince of the Pride Lands, a swath of African savannah. However, the dark specter of his treacherous uncle Scar ultimately drives Simba out of his home. After being taken in by two outcasts faraway from the Pride Lands, Simba must learn to grow up and accept his responsibility as king and reclaim his destiny.

Knowing the importance of the music to the original, Favreau pulled out all the stops for the film's soundtrack, recruiting much of the original film's music team; he tapped Hans Zimmer to return and score the film, which gave Zimmer the opportunity to build on and reinterpret his original Oscar-winning soundtrack. Working alongside Zimmer was Pharrell Williams, who helped produce and revamp the returning songs, and Chance the Rapper also assisted in the soundtrack. Zimmer brought with him his old friend Lebo M., the iconic vocalist who once again ensured the soundtrack had its trademark authentic African tapestry. Song arranger Mark Mancina also returned, as did lyricist Tim Rice and Elton John. Sir Elton contributed a new original song for the film and assisted in the soundtrack's production, which served as his final major act before his retirement. Beyonce produced her own separate album for the film, titled The Lion King: The Gift, featuring the new track "Spirit". Beyonce later made a film based on this album, entitled Black Is King, which was released on Disney+ on July 31, 2020.

to be directed by Moonlight creator Barry Jenkins. The film, titled Mufasa: The Lion King, is planned to be released in 2024, and will feature Timon, Pumbaa, and Rafiki (with Seth Rogen, Billy Eichner, and John Kani reprising their respective roles) narrating the life story of Mufasa from his childhood to his ascension to king of Pride Rock. Though the framing device takes place in the present day after the first film, it will not be an adaptation of The Lion King II: Simba's Pride.

The Lion King contains examples of: