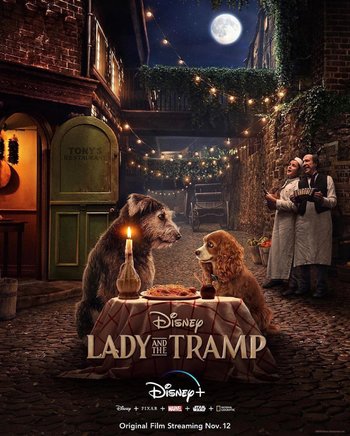 Lady and the Tramp is a live-action adaptation of Lady and the Tramp, directed by Charlie Bean and written by Andrew Bujalski and Kari Granlund. It was released on November 12, 2019 on Disney+ upon the platform's launch. It is the first of the Disney Live-Action Remakes to be released digitally instead of theatrically.

Lady (voiced by Tessa Thompson) is a pampered pet Cocker Spaniel who lives with her owners. One day, she meets a stray called the Tramp (voiced by Justin Theroux) and joins him on an adventure.

Unlike the theatrical remakes, the film uses real animals with minimal CGI. Several of the dog actors featured in the film are shelter dogs.

Lady and the Tramp provides examples of:

Lady chases the Rat in her yard away.

Lady chases the Rat in her yard away.