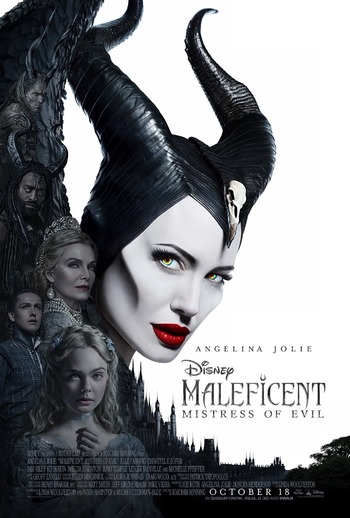 Evil never looked so good.
"I remember the story of an evil witch, and the princess she cursed to sleep forever. The story became legend. But this is no fairy tale."
— Queen Ingrith
Advertisement:

Maleficent: Mistress of Evil is the sequel to Maleficent. It's directed by Joachim Rønning (Pirates of the Caribbean: Dead Men Tell No Tales) and written by Linda Woolverton (Maleficent, Beauty and the Beast), Micah Fitzerman-Blue, and Noah Harpster. Angelina Jolie, Sam Riley, Elle Fanning, Imelda Staunton, Lesley Manville, and Juno Temple reprise their roles from the previous movie.

Set five years after the events of the first film, Prince Phillip (Harris Dickinson) has proposed to Aurora and takes her to meet his family. But tensions between Maleficent and Phillip's mother, Queen Ingrith (played by Michelle Pfeiffer), soon devolve into war.

Aurora: Godmother! This isn’t you. I know you.
Maleficent: You do not.