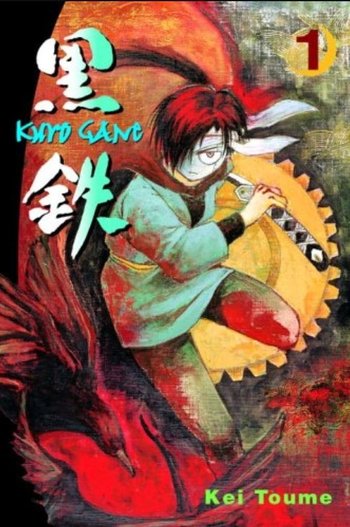 Kurogane ("Black Steel") tells the tale of "Hitokiri Jintetsu", a boy just in his teens who has become renowned for his swordsmanship and his proficiency in killing, despite his young age. After getting revenge on his father's murderer, Jintetsu is forced to constantly flee from bounty hunters who wish to collect the price on his head. Despite the skill of these killers, none are capable of besting him in combat, and he's consistently victorious. The deaths that lay in wake earn him the "Hitokiri" moniker. Unfortunately, as fate would have it, he ends up meeting his fate not by someone of equal or even greater skill, but rather by a pack of wild dogs. Though he eventually slays them all, he is fatally wounded.

A ronin named Genkichi finds him in his final moments, and he tells the man that he is ready to die so he should hurry up and finish him off. Genkichi informs him that he has no intention of killing him since his wounds will take care of that anyway. When Jintetsu finally dies of blood loss, the former samurai brings him back to his home and actually manages to revive him. However, there is a horrible catch. A great portion of the boy's body was destroyed, so in order to compensate, Genkichi constructed a partially mechanized body of steel and wood (though there is an inconsistency where the first chapter of manga shows him with a fully mechanical body, while the end of the manga portrays him as only be partly mechanical). Although he also managed to repair most of the killer's nerves and motor functions, he is unable to repair his vocal cords and right eye, slightly impairing the swordsman's abilities and making him mute. Jintetsu does not take to his revival kindly, but is forced into inaction since he isn't used to his body just yet. He is then given new clothes to hide his appearance, and a new sword that Genkichi also notes as being mechanized.

Eventually, Jintetsu comes to accept his existence, though he later finds out Genkichi only built him to prove to his former master his ingenuity. His creator then dies after getting his revenge on the said master, apologizing to the assassin for using him before succumbing to his wounds. Jintetsu, surprisingly, seems to forgive him, burying him rather than leaving his corpse as it lay. He then uses the sword he had given him as a grave marker, and begins to walk away from the scene. However, before he can leave the area, the sword speaks and implores Jintetsu to not leave his equipment behind and to take him with him. Though surprised, he obliges, and the sword reveals his name to be Haganemaru, and that he can read Jintetsu's thoughts since the two share a mind. Therefore, not only is he his weapon, but can also speak for him on his behalf. The manga then follows their adventures as Jintetsu works as an assassin-for-hire and Haganemaru as his instrument of death. All the while he is trying to throw away his past, and escape from the various people who are seeking vengeance for what he had done. Along the way he meets a particularly determined young girl named Makoto, who wants to avenge the destruction of her family, and subsequently ends up becoming a makeshift companion. He also earns the nickname of "Jintetsu of Steel" for his metallic face, which many assume is a mask despite it actually being an irremovable part of his body since his revival.

The manga ends prematurely after Jintetsu has a confrontation with a swordswoman who can match him blade for blade. He leaves for parts unknown afterward (as always), with Makoto in close pursuit.

Not to be confused with the 2011 manga of the same name.