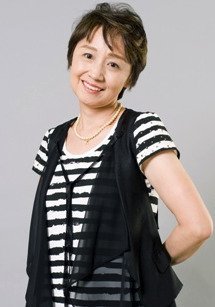 Keiko Han is a seiyu born on April 5, 1953 in Shinbashi, Tokyo. She is usually typecasted as The Ojou like Saori Kido in Saint Seiya, "I Let Gwen Stacy Die"-subject Lalah Sune in Mobile Suit Gundam, or youthful mothers. She has a strong association with the World Masterpiece Theater franchise as well, having had major roles in several of those series and also sung the theme songs for Swiss Family Robinson.

When she's not in her seiyu jobs, she can tell the future for you as an astrologer. Really.

Early in her career, she did live-action and stage work as well, but eventually gave those up to focus exclusively on voice acting. She has also dabbled in singing, recording themes and image songs for various anime series.

Has a voice-acting relationship of sorts with Tōru Furuya and are personal friends.

She also has a daughter, Megumi Han, in the voice-acting business as well.