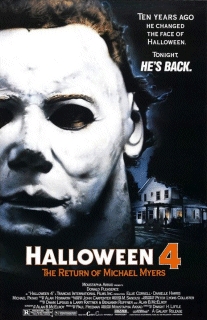 "Six bodies, Sheriff! That's what I've seen between here and Ridgemont! A filling station in flames! I'm telling you Michael Myers is here, in this town! He's here to kill that little girl and anybody who gets in his way!"
— Dr. Loomis
Advertisement:

When the idea of making the Halloween franchise into a Genre Anthology didn't work out, the studio had an obvious solution: bring back The Shape himself. Thus, this film picks up a decade after the events of Halloween II (1981).

In Halloween 4: The Return of Michael Myers, ten years have passed since Michael Myers terrorized the town of Haddonfield, Illinois. The fire that seemed to consume both Michael and Dr. Samuel Loomis (Donald Pleasence) put Myers in a comatose state and burned Loomis over a good portion of his body, but both men lived. During a medical transport, the medical staff members happen to mention the fact that Michael has a young niece, Jamie (Danielle Harris), of whom he was previously unaware. Michael awakens from his comatose state, massacres the ambulance personnel, and heads back home with a new target in mind: Jamie herself. Loomis, as usual, follows the trail back to Haddonfield, and it soon becomes a race against time to save Jamie from her psychotic uncle.

While not seen as the best of the series, it was well-received by fans at the time of its release, and did decent business at the box office, enough to bring Michael Myers back for good. It also begins a three-part story arc that continues with the fifth movie and concludes with Halloween: The Curse of Michael Myers.

Halloween 4: The Return of Michael Myers contains examples of the following tropes: