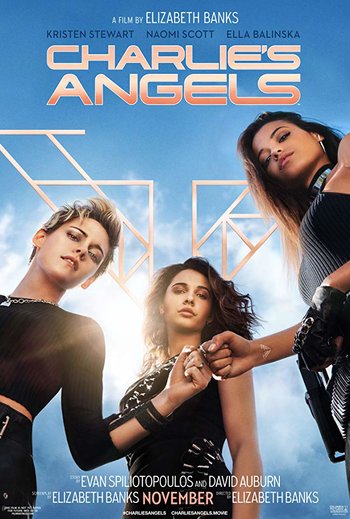 "You are in the presence of angels."
Advertisement:

Charlie's Angels is a 2019 action comedy that serves as a continuation of both the film and TV series., although it utterly overwrites certain aspects of the TV show and the films.It stars Kristen Stewart, Naomi Scott, Ella Balinska, and Elizabeth Banks, the latter who is also the film's director, writer, and co-producer. Patrick Stewart and Djimon Hounsou, Sam Claflin, and Noah Centineo also star.

Scientist Elena Houglin (Scott) has developed a new kind of technology called Callisto, which can remotely provide clean energy. When she and the tech become targets of a mysterious villain, Angels Sabina Wilson (Stewart) and Jane Kano (Balinska) join forces and recruit Elena to become a new Angel and save the world.