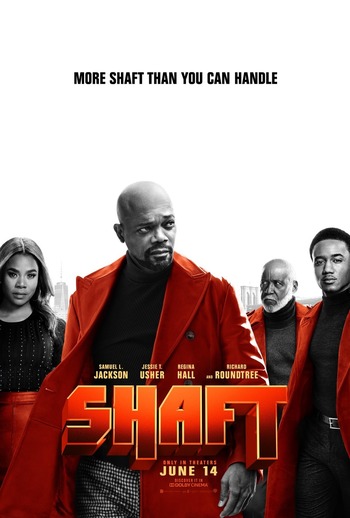 "Please tell me that you did not get our son involved in your bullshit!"
"If you’re going to pursuit this investigation, I'm going to have to babysit your ass."
— John Shaft II to John Shaft III
Advertisement:

Shaft is a 2019 action-comedy-crime film directed by Tim Story and written by Kenya Barris and Alex Barnow and the fifth film in the Shaft series, bringing three generations of John Shafts together — the original, the second, and a much younger third.

John "JJ" Shaft III (Jessie T. Usher) is an FBI agent and cybersecurity expert with a degree from MIT. After his best friend dies due to suspicious circumstances, he turns to his estranged father - John Shaft II (Samuel L. Jackson) - to uncover the truth. Father and son must navigate the Harlem underworld to solve the crime. Along the way, they team up with the legendary first generation John Shaft (Richard Roundtree).

The film was theatrically released in North America on June 14, 2019, and is streamed on Netflix in the rest of the world since June 28, 2019.