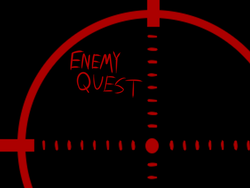 "In the year 200X aliens invaded from another dimension. After a long and bloody war, a fragile peace was achieved. Now go, date cute alien immigrants, and get your Kirk on."
Advertisement:

Enemy Quest is a Romance/Science-Fiction interactive comic in the same vein as Ruby Quest and its more recent Spiritual Successor Nan Quest. It follows the story of one Zack Nguyen as he's hired by a government agency to take place in a cultural exchange program with Earth's newest residents: the Visitors, a collection of four alien races from another dimension.

The Visitors first came to Earth when they opened a portal between their dimension and humanity's and started invading. Thankfully a truce was eventually signed and now an uneasy peace has settled between humanity and the Visitors, allowing immigrants from the Visitor's dimension to make their way to earth. This is where Zack and others like him come in. How are they supposed to learn about their new, alien neighbors?

Zack finds himself representing humanity as he gets romantic with four pretty alien ladies, each representing a species of Visitor.

Meet the objects of Zack's affection:

The comic has several moments of drama and humor, can get pretty NSFW at times, and the writing remains of the highest quality throughout the threads.

Beware of massive spoilers! You have been warned!

The Questden page can be found here

and the first thread can be found here