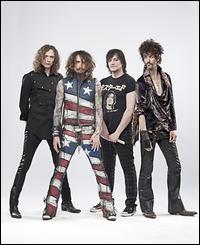 The Darkness circa 2012. From left to right: Dan Hawkins, Justin Hawkins, Ed Graham and Frankie Poullain
The first flush of youth was upon you when our eyes first met,
And I knew that to you and into your life I had to get.
I felt light-headed at the touch of this stranger's hand...
An assault my defences systematically failed to withstand.
"Love Is Only A Feeling"
Advertisement:

Before The Darkness, Justin and Dan were in a band named Empire. In this case, Dan was the lead singer and Justin was on guitar. Justin managed to become lead singer after doing an amazing version of Bohemian Rhapsody at a karaoke party, which reportedly involved many starjumps. It's around this time they left Empire behind and began focusing on a new project: The Darkness.

They called in Ed Graham to play Drums, and they met Frankie Poullain in London. They began doing the pub circuit to moderate success; their shows were so good they had a place in a music festival lineup before they had their first album. The British press went nuts, considering The Darkness as no more than a mediocre joke who would burn out in a few weeks.

And then they released Permission to Land. It was a smash hit.

After the second album, One Way Ticket... To Hell And Back, Justin checked himself into rehab for his cocaine habit. Despite the band announcing a third album by the end of 2007, Justin got out of rehab and chose to leave the group, effectively breaking up The Darkness. They reunited in 2011 over an Indian dinner, and since then have performed and released new music like clockwork.

Not to be confused with the comic The Darkness, nor its video game adaptation.

Trope is only a feeling :