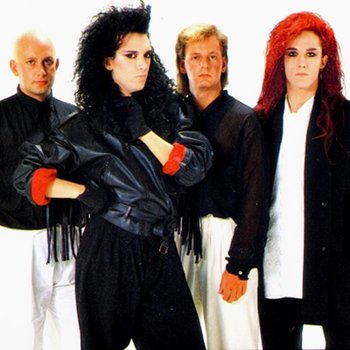 Dead or Alive was an English New Wave-New Romantic-Synth-Pop band popular in the 1980's and the very early '90s. Their popularity mostly stemmed from their androgynous frontman Pete Burns.note Amusingly, Pete would later accuse Boy George of stealing his androgyne look, as he used it in 1980 before Culture Club released their first album in 1982.

Hailing from Liverpool, the band started in 1980 with keyboardist Marty Healey, guitarist Mitch, bassist Sue James, and drummer Joe Musker. The band had a few hits like "I'm Falling" & "Number Eleven", but the rising recognition of other acts like Duran Duran meant the public quickly forgot about them. In response, the line-up was retooled, with Wayne Hussey and Mike Percy becoming the new guitarist and bassist, respectively. After signing on with Epic Records, the singles started rocking the charts around 1984, with music videos on MTV giving the band a much needed boost. Their big hit that year, "You Spin Me Round (Like A Record)", has gone one to become one of the most beloved 80s songs and was the first in a string of hits by the production team of Stock Aitken Waterman.

Their albums were popular, if not well-reviewed, until the release of Mad, Bad and Dangerous to Know, which was considered very bad by critics and fans alike (though the Japanese fanbase liked it). After 1988's Nude, the band lost several principal members, essentially making them dead, yet still alive, with three more albums being released from 1995 onward.

In the late 90s and early 2000s, Pete Burns was a regular on the UK reality show, Celebrity Big Brother, where he became well known for his entertaining cattiness and increasingly insane fascial reconstruction surgeries. This helped the band maintain a fanbase as they continued to tour for the next two decades.

Dead or Alive provides examples of: