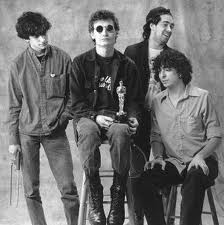 Decent American Artists
"Out in the woods
Up to no good
I wanna make friends with the badger"
—The Badger Song
Advertisement:

Punk grew in popularity during the 1970s and by the mid-eighties it was a pretty mainstream genre, with prominent political punk bands gaining mainstream critical acclaim and billboard hits. Punk music was Serious Business, often addressing social ills that were largely ignored by mainstream society.

The Dead Milkmen took another angle.

Poking fun at religion, politics, society, and punk music itself, the Philly-based Dead Milkmen are certainly one of the greatest satiric rock bands. Invoking, subverting, and referencing standard musical cliches, the Dead Milkmen had a pretty steady underground following from their start in 1983 and received more mainstream attention from Punk Rock Girl. The band broke up in 1995, having released eight studio albums, one live record, and a bunch of other side releases.

In 2008 they reunited with a new bassist, Dan Stevens, as founding member Dave Blood passed away in 2004. Their latest album, Pretty Music for Pretty People, was released in 2014.

"Big Trope in My Backyard":