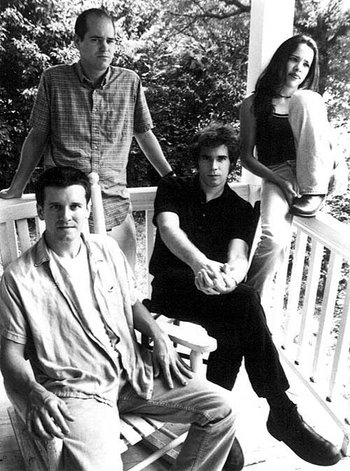 Superchunk is an American Indie Rock band from Chapel Hill, North Carolina consisting of Ralph "Mac" McCaughan (guitar, vocals), Laura Ballance (bass), Jim Wilbur (guitar), and Jon Wurster (drums). Known for their high-energy style and frontman McCaughan's enthusiastic vocals, their punk influences show both in their music and the do-it-yourself way in which they have managed their career.

The band was formed in 1989 by McCaughan (guitar, vocals), Ballance (bass), Chuck Garrison (drums), and Jack McCook (guitar). Originally they just called themselves Chunk, but added the "Super" to avoid being confused with a similarly-named jazz band from New York. McCaughan and Ballance founded their own record label, Merge Records, to release their first official single, 1989's "Slack Motherfucker". After their first album, 1990's Superchunk, released on Matador Records, McCook left the band and Wilbur was brought in on guitar duties. Before the release of their sophomore breakthrough, No Pocky for Kitty, Garrison left and was replaced by Wurster.

Despite their growing popularity, the band continued to stay with Matador until the release of Foolish in 1994, which saw them return to Merge. Every album since then has been on Merge, including 2010's critically well received post-hiatus albums Majesty Shredding and 2013's I Hate Music.