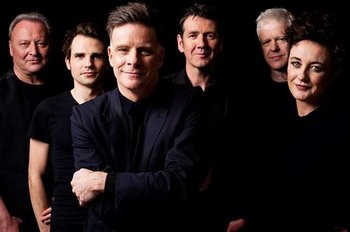 Left to right - James Prime (keyboards), Lewis Gordon (bass), Ricky Ross (lead vocals), Dougie Vipond (drums), Gregor Philp (guitar), Lorraine McIntosh (backing and lead vocals)
Cause I look, in the mirror,
And it throws, back the question,
And I whisper, in words,
That beg, an answer,
Tell me can, this white man sing the blues?
— "Fergus Sings the Blues"
Advertisement:

Deacon Blue are a long-running Scottish rock band formed in Glasgow in 1985. The group is characterised by the dual lead vocals of Ricky Ross & Lorraine McIntosh in addition to down-to-earth lyrics. Though they had their most success in the late 80s and early 90s, they still continue to tour and achieve critical success.