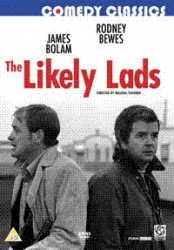 The Likely Lads was a black and white Britcom that ran from 1964 to 1966 on The BBC. It followed the escapades of two young working-class men Oop North, Terry Collier (who was proud of his roots) and Bob Ferris (who wanted to better himself and become middle-class). It was created by Dick Clement and Ian La Frenais, and starred James Bolam as Terry and Rodney Bewes as Bob.
Advertisement:

However, what most people remember now is Whatever Happened to the Likely Lads?, a colour revival that ran from 1973 to 1974, still written by Clement and La Frenais. In this show, Bob had succeeded in becoming middle-class and was engaged to the very middle-class Thelma, when Terry suddenly reappeared (he'd joined the army at the end of the original series), throwing his life into confusion. As was common practice for many British sitcoms of the time, a spin-off movie followed in 1976.

Whatever Happened to the Likely Lads? contains examples of:

Oh, what happened to you?
Whatever happened to me?
And what became of the people we used to be?

Alternative Title(s): Whatever Happened To The Likely Lads