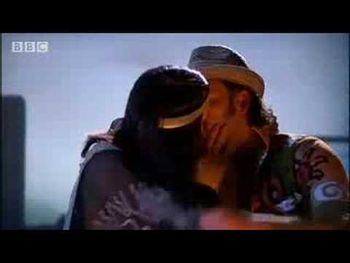 Because they are totally "Just Friends"
Vince: Honestly, I'm not interested in your wife. I'm in love with someone already. I'm in love with Howard
Howard: Oh yeah, we're in love.
Dennis The Head Shaman: Prove it.
(Vince kisses Howard)
Vince: I thought you loved me.
Howard: That was a momentary lapse.
Vince: Listen, "Fiddler on the Roof," we kissed up there!
Vince: Unbelievable. I've never been chucked in my life, now I'm being chucked by you?
Advertisement:
Howard: Come on, you'll find someone else.
Vince: I'll never love again.
"You can try to dress it up as some intellectual question but at the end of the day it's just they were tonguing each other"
—Boosh QaA, live in London

There's plenty of Ho Yay in The Mighty Boosh, most of it between Howard and Vince, who also have a hell of a lot of UST between them. In fact, Noel Fielding and Julian Barrat have hinted that the subtext is a part of the show, but Howard and Vince won't get together any time soon, if at all. There's also a bit between Bob Fossil- and well, anything that moves, really.