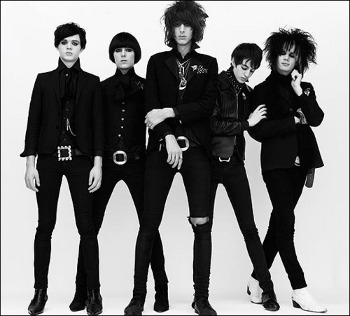 The Horrors are a band of eclectic stylings based in Southend-on-Sea, England, and founded on their mutual fascination with vastly different genres of music and their hobbies of collecting vinyl records. Their debut album, Strange House, brought them tons of media attention through their unique image, their varied and unlikely influences (from Joy Division and Bauhaus to Iggy Pop to The Gun Club to Kraftwerk) and the fact that they simply didn’t care as to what people thought of them. Their stressful stint as an opening act for Arctic Monkeys in 2006 made apparent the potential of the frontman, Faris Badwan, for violence and general antipathy toward the audience. Notable examples include scaling everything in sight, hurling paint buckets and trash cans into the crowd, and threatening the audience with rocks and large pieces of glass. 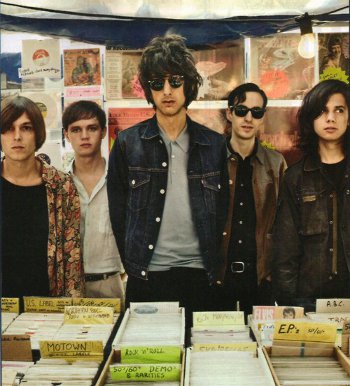 The Horrors, present day. Note the lack of eyeshadow.

The band cleaned up their act both literally and figuratively with their second album, Primary Colours, nominated for a Mercury Prize and generally considered their best by fans and critics alike. Their image became less overtly gothic, and their sound, while still known for its eclecticism, became heavily influenced by Shoegaze and Psychedelic Rock. Tom Cowan picked up the synthesizers and Rhys Webb took his place as bassist. They followed up with the non-album single ''Whole New Way’’.

Their third album, Skying, was a Lighter and Softer variant on the sound shown in Primary Colours. It gained critical acclaim in the British indie and alternative scene, leading to the band winning the NME award for Album of the Year 2012 (despite the fact that 2012 had barely begun when they won it).

Faris Badwan has done numerous musical side projects, most notably Cat’s Eyes with Canadian opera singer (and possible girlfriend) Rachel Zeffira. He is also an avid visual artist and has had two art exhibits, Drawing A Straight Number 9 and Creatures in Colour. is also a talented soccer/football player (the latter much to people’s surprise). Bassist Rhys Webb and synth player Tom Cowan have collaborated on a side project under the name Spider and the Flies, and have released a self-titled EP.

If you ever see them live, don't ask them to play anything from ''Strange House''.

This band and their songs/albums provide examples of: