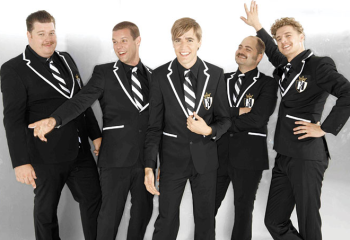 The Hives are a Swedish rock band from Fagersta, Sweden that rose to prominence in the early 2000s during the Garage Rock revival. Their mainstream success came with the release of the album Veni Vidi Vicious, containing the single "Hate to Say I Told You So". The band is known for their energetic live shows, and have been acclaimed by music critics as one of the best live rock bands of their era.

Younger tropers may remember them from their 2007 song "Fall Is Just Something That Grownups Invented," which played in Cartoon Network during the summer of that year.

In the midst of the COVID-19 Pandemic, the band made headlines at the tail end of 2020 by doing a virtual world tour.

"I KNOW YOU WANT US TO PLAY MORE. BUT THAT'S ALL THE TIME WE HAVE, SO YOU CAN TURN OFF NOW."