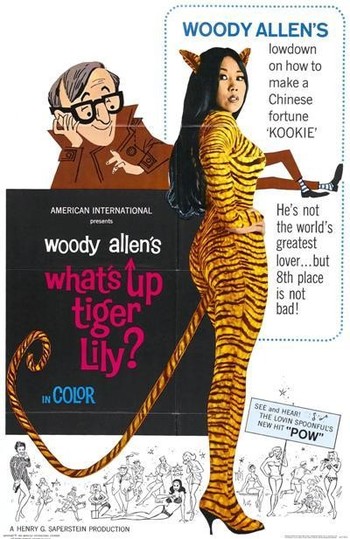 What's Up, Tiger Lily? is a 1966 comedy film written and directed by Woody Allen in his directorial debut.

The film, featuring a soundtrack by The Lovin' Spoonful, is a Gag Dub of the 1965 Japanese spy film/James Bond clone International Secret Police: Key of Keys, in which superspy Phil Moscowitz searches for a secret egg salad recipe stolen from the leader of a "real-sounding but non-existent" country ("We're on the waiting list. As soon as a spot opens up on the map, we're in.").

The idea of a gag dub was so new that Allen appears in an interview segment at the beginning to explain the concept.

This version of the film contains examples of: