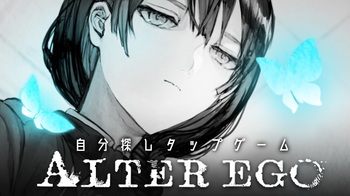 Presented as a game to "discover oneself", the game revolves around the player wandering in a monochrome library-like world and being guided by a mysterious woman named Es.

The player wanders through an endless aisle where they click thought bubbles, which generally show quotes from literary classics and phrases related to the personality tests Es gives to the player, to collect EGO points. They can also buy books which allows the player to passively accumulate EGO points and "read" pages of said books to upgrade the books' accumulation rate.

The main story progresses when the player reaches an EGO point milestone.

Originally released on mobile devices in Japanese, the game eventually got an English release.

A version of the game for Nintendo Switch called ALTER EGO S is set to be released in 2020.