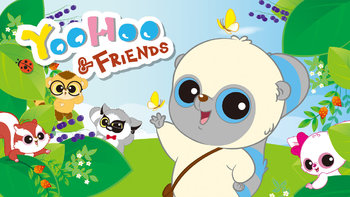 "Come and join us for the ride!"note From left to right: Chewoo, Roodee, Lemmee, YooHoo, and Pammee.
"YooHoo and Friends travel together
With friends, it's sure to be a blast
We can all go anywhere, as long as we're with friends
To places filled with happiness (YooHoo!)"
— Part of the first season's "Do It Yourself" Theme Tune
Advertisement:

YooHoo & Friends (Hangul: 유후와 친구들) is a South Korean animated show based on the toyline of the same name, and the first in the franchise. The series centers on five friends that helped grow the Tree of Life; YooHoo, Pammee, Roodee, Chewoo, and Leemee. When the tree's seeds are accidently blown away to Earth, the group are sent there as well. Now separated from their home YooTopianote Suddenly called Greenet in season 2 of the English dub., YooHoo and his friends embark on many adventures to find the missing magical seeds, avoiding danger and meeting new friends along the way.

The show originally ran for one season in 2009 on KBS2. The series was then suddenly Un-Canceled in 2013 and ran for two more seasons on KBS1 with a noticable animesque Art Evolution, and the series officially ended in 2015.

In the US, the series has a (faithful) English dub that can be viewed on Amazon

.note For reasons unknown, four episodes from season 2 are missing (see Trivia). You can also view the episodes on the official YooHoo & Friends YouTube account here

Probably most notable for having been officially abridged by Cow and Chicken creator David Feiss in 2012, where the show would be re-dubbed and re-animated for a Western audience with a completely different (and frankly, batshit crazy) premise. For tropes pertaining to that specific dub, see here.

After the show completed its run, Aurora World would partner with Mondo TV to eventually reboot the franchise in 2019 with a CGI-animated series on Netflix, YooHoo to the Rescue.