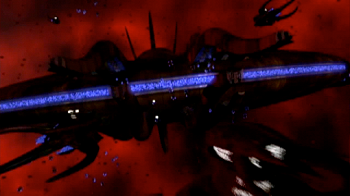 That's the Vorlon version of a Death Star.
Drazi Ambassador: Captain, we're sorry. We thought you were dead.
Sheridan: I was. I'm better now.
Advertisement:

As preparations for the assault on Z'Ha'Dum continue, Ivanova gets the idea to go out and see if she can find some more First Ones. Delenn approves, but since Ivanova's Minbari is...thickly accented, she send Marcus along as an interpreter, with instructions to make sure none of the crew laugh at Ivanova.

Meanwhile on Centauri Prime Londo and Vir witness Cartagia and his court humiliating and tormenting G'Kar. They can only shake their heads.

After several days, Ivanova's search is going poorly, hitting nothing but dead-ends. They press on, while back on station Zack informs Delenn he's got the information G'Kar was looking for but can't get a hold of him. Since time is of the essence, he decides to chase it down himself.

Londo and Vir are walking through the palace gardens talking about what they saw. Londo wishes he didn't feel anything about it, it would make it easier to bear, but there's nothing they can do for now. Only when the time is right, can they make their move against Cartagia. Vir is still unsure about it, but the conversation is cut off when Cartagia suddenly appears, hands red with G'Kar's blood and cursing the Narn's stubborn refusal to scream. He talks about how he personally took over the torture, but G'Kar never made a sound. He then empties a bowl full of blood over a potted plant, then shoves it at Vir, who has had a considerable change of opinion. Cartagia needs to die.

Back on Babylon 5, Zack leads a shuttle wing out to track down Garibaldi, while Delenn goes to see Lyta. Her requests to the Vorlons for ships have gone unheeded, which Delenn finds surprising. Lyta thinks something else is going on, but has no idea what. She's begun to think the Vorlons don't care about them anymore, and is reluctant to inquire about what they're up to. Delenn asks her to at least try to find out.

Zack's wing is in pursuit of a suspect craft, and when it refuses to heed their demands to stop, they open fire striking its engine. Soon after it ejects a lifepod, and then explodes. Fortunately Garibaldi is on the pod. The computer says something about initiating a program and his eyes open. They bring him back to the station and in Medlab Dr. Franklin begins examining him, congratulating Zack for finding him. It was good fortune, and Zack seems to be thinking it was a little too good as Garibaldi starts to come around.

In the Vorlon's quarters, Ulkesh is withdrawing part of his conciousness from Lyta, which she finds painful. She begins demanding to know what's going on. She notes the differences between him and Kosh, thinking that Kosh actually cared about the younger races. Ulkesh is indifferent and Lyta insists she has earned some respect, which only gets her a contemptuous, "Respect? From whom?" Crestfallen, Lyta is about to leave, but then tries to read Ulkesh's mind. In response the Vorlon knocks her into the wall, then shows her just what's on his mind. She starts screaming.

Londo has gone to G'Kar's cell, trying to pursuade him to just give Cartagia what he wants, but G'Kar feels that doing so would mean he is no longer Narn. Londo counters by asking if his pride is worth the freedom of his world. G'Kar tells him he doesn't know what he's asking, but Londo says he does, then leaves.

On the White Star, Ivanova and Marcus are chatting about their lives after the war, when the scanners pick up something strange. Part of hyperspace seems to have been folded in on itself, and since the First Ones are the only ones that could do something like that, they decide to investigate. Inside they find a Vorlon fleet escorting a truly massive vessel.

The Brakiri ambassador meets with Delenn bringing information that some of the other ambassadors are arranging a protest rally in the Zocalo later today. Delenn doesn't intend to stop them, but she intends to go as give her side. Before he leaves, the ambassador says a strange ship has been sighted in hyperspace, seemingly heading toward Babylon 5.

On Centauri Prime, Londo and Vir are dragged out of bed in the middle of the night. A guard leads them to a darkened chamber where Cartagia sits waiting for them. G'Kar is also there, chained to a column, where Cartagia intends to have him beaten with an electro-whip, which will give an increasing level of pain with each stroke. At forty, it will be fatal, even for a Narn. The whipping will stop when G'Kar screams. The emperor begins counting strokes, and Londo and Vir watch. G'Kar bears the first few with little more than winces, but as they approach twenty he begins contorting his face to keep from crying out as Londo mouths "scream" to him and Vir tries to look anywhere else. By thirty strokes, G'Kar is twisting in agony as Cartagia counts on.

Cartagia smiles in sadistic glee as Londo breathes a sigh of relief.

Ivanova's White Star return to Babylon 5, asking to see Lyta immediately, and for C&C to monitor sector 70x10x53. For what, she's not sure.

In the Zocalo, Lennier notes people seeming to be heading somewhere, and informs Delenn. In C&C Ivanova arrives just as the strange ship from earlier jumps out, and begins activating docking sequence using their own codes! Ivanova scrambles a security force to be there when it docks. Garibaldi, still not 100% suits up to be there as well.

Delenn goes to where the rally is being held, arriving just as the Drazi and Hyach ambassadors start. They inform the crowd about Delenn's plan to attack Z'Ha'Dum. They believe that the Shadows may just go away, but Delenn protests they will attack either way.

As security arrives in the docking bay, they are stunned by who emerges from the ship.

The rally begins taking a more violent turn, the crowd pressing in on Delenn, as the Hyach ambassador carries on about how folly it is to go to Z'Ha'Dum, that no one who does comes back and Sheridan died in his attempt, just as the captain himself appears on the catwalk next to them.

He begins telling the crowd some of the things he learned, most importantly that the Shadows can be killed and there is a way to end the war once and for all. To do that, he will need the support of every government.

Sheridan: Together we will form the largest fleet in history, not just for a battle, but to change the shape of the galaxy! Not just for ourselves, but for out children, and our children's children. And tell your governments that the only man to survive Z'Ha'Dum send this message: We can end this, not just for now, not just for the next thousand years, but forever! I stand before you as proof that it can be done! We can fight and we can win, but only if we do it together! Can I count on you? Will you stand together?

As the crowd cheers in support, Delenn makes her way to Sheridan and the two embrace.

Later in his office, Sheridan explains what the real cause of the war is to the command staff, with Lorien present. Originally, the Shadows and Vorlons stayed behind as caregivers for the younger races, but they had opposite views on how to do it. Originally, they had an agreement that they both abided by...

Garibaldi is staring suspiciously at Lorien, wanting to know just who he is, but Sheridan's being rather tight-lipped on the subject at the moment. Garibaldi, for some reason, is acting even more suspicious than usual, and is not happy to have information withheld.

Delenn tries to steer the conversation back to the war, and Sheridan explains that at some point both of them decided that their way was the only way and they've been fighting ever since, with the younger races caught in between.

Ivanova and Marcus come in with Lyta in tow. They're happy to have Sheridan back, but they've brought grim news. They lost track of the Vorlon fleet they found somewhere near a known Shadow base. It's gone now.

Lennier: The base?
Lyta: No, the planet. They destroyed an entire planet.

There were over four million people there, but to the Vorlons it was an acceptable loss. It's only a matter of time before the Shadows retaliate. The war is back on.

Garibaldi: We could barely stop the Shadows. How do stop them and the Vorlons?
Lyta: I don't know. All I know is unless you do stop them it won't matter who wins and who loses, because none of us, not a single world for 70 light-years in any direction, will live to see it.

As the weight of their situation sinks in, the Vorlon fleet continues on to its next target.