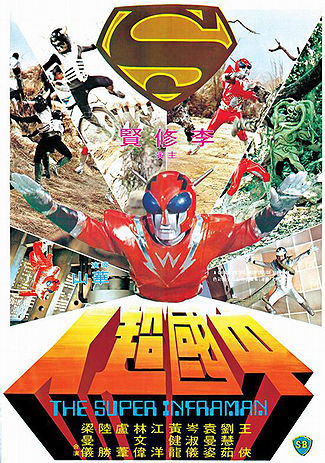 Originality!
The man beyond bionics!
Advertisement:

The very first Chinese superhero film, The Super Inframan is a Tokusatsu-style film produced by the legendary Shaw Brothers Studio in 1975 and released in America the following year under the title Inframan. It's notable for being a fairly transparent knockoff of Ultraman and Kamen Rider (although, despite the poster or original namenote  Literally Chinese Superman, not of Superman) that somehow managed to get a three-star review

from Roger Ebertnote Originally he gave it two-and-a-half stars; he re-rated it upon Quentin Tarantino's theatrical re-issue of The Mighty Peking Man, the Shaws' imitation of King Kong. Nevertheless, it's a fun, campy Chop Sockey film whose special effects and acting are, if not great, then at least in the same league as its "inspirations."

The story goes as follows: Princess Dragon Mom (Demon Princess Elzebub in the original) wakes up from hibernation and decides to conquer Earth, so she defrosts a few monsters — including the tentacled Octopus Mutant, the fire-breathing Emperor of Doom, and the oddly cuddly-looking Nemesis — and sends them out to wreak havoc. In order to combat them, young Science Patrol member Rayma (Danny Lee) volunteers to become cyborg Henshin Hero Inframan. Kung fu is utilized, motorcycles are ridden, Chekhov's Guns are fired, and even One Winged Angels prove to be vulnerable to Thunderball Fists.

The Super Inframan provides examples of the following tropes: