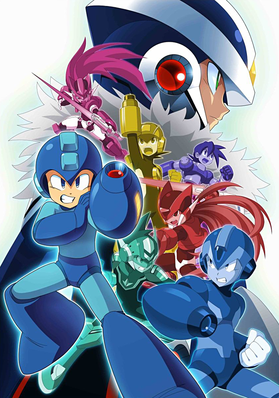 Model ZX, MegaMan.EXE, Mega Man Volnutt, Zero, Mega Man X, Geo Stelar as MegaMan, and Mega Man proper. The new robot in the background is OVER-1.
Rockman Xover (pronounced "crossover") is an iOS game made to celebrate the 25th anniversary of the Rock-er, Mega Man franchise. It was released on November 29, 2012 for Japan.
Advertisement:

In it, villains such as Dr. Wily and Sigma have teamed up thanks to a Time Crash and captured all the Mega Men, putting Crossover World in jeopardy. Dr. Light and Dr. Cossack get to work producing a Reploid to stop this - OVER-1, a production model.

OVER-1 is able to collect Battle Chips (no relation to the Battle Network objects of the same name) to increase its Battle Memory, which will allow it to mimic the abilities of the Mega Men before it. Its job is to save the missing heroes and Crossover World in general.

In the grand tradition of most iOS titles, you can buy certain items instead of collecting them. You may also summon a friend's OVER-1 for use in battle.

Rockman Xover ceased operations on March 31st, 2015, after nearly two years of service. It's unknown if the story will be brought to a closure.