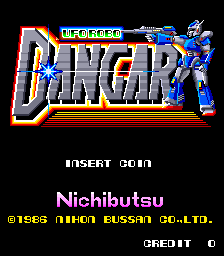 The titular Humongous Mecha.
Dangar - UFO Robo is a Vertical Scrolling Shooter released for arcades by Nichibutsu in 1986.
Advertisement:

Unlike many other Shoot Em Ups of its time, the game has you pilot a Humongous Mecha that fires out Rocket Punches for its weapon. Along the way, you can also pick up a gun for your mecha, and eventually, larger modules that boost your firepower even further. Taking damage will downgrade your mecha's form (or lose its upgrade module if it has one) to a standard ship, which will be destroyed on the next hit, although you can upgrade your ship back up to mecha form (it takes one powerup to upgrade to a larger, slightly more powerful ship, and one more to upgrade back to mecha form).

If you are in upgraded ship form or higher, you can split your mecha/ship up (up to 3 times, unless you get an upgrade) into separate parts. In ship or mecha form, this reduces your hitbox and turns your non-main parts into Attack Drones. In upgraded mecha form, this grants an alternate fire form.

Dangar is a pretty neat shooter, especially for its time, if you can get past some of its quirks as an 80's shooter (Checkpoints instead of respawning where you died, the fact that you need to stay alive long enough to get the upgrades, lack of bullets in contrast to more modern shmups).