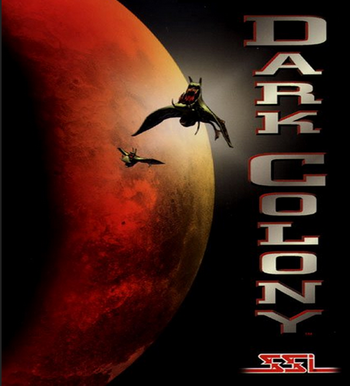 Dark Colony is a 1997 Real-Time Strategy game for Windows PCs, developed by GameTek and published by Strategic Simulations, Inc. Set on a terraformed Mars in 2137, it focuses on the conflict between humans and aliens for domination of the planet.
Advertisement:

The backstory is your usual fare. Earth slowly runs out of resources, so plans are drafted to expand to the nearest viable planet — Mars. When a new energy source, Petra-7, is discovered beneath the red crust, Earth's major corporations scramble to colonize the planet. The largest of these are Pan Luma Industries, Aerogen Corporation, and Stratus Enterprises, which become the de facto rulers of the planet. To better support human life, Mars is terraformed, giving birth to vast deserts, lush jungles, and plenty of wildlife.

All is well until the aliens show up. The Taar are a dying race that needs a new world. Mars fits, though first they have to get rid of the human presence. The campaign can be played from either view point and ends with the same result — total extermination of the opposing side on Mars.

It has since become freely available