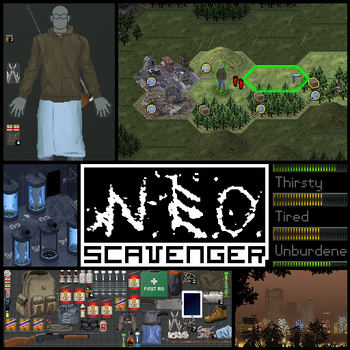 The world? Hell. Who knows? I mean, who knows what happened to the world? Place's gone all sideways, and who the hell knows?
—Bernie, Tent City Junk Peddler
Advertisement:

NEO Scavenger is a roguelike turn-based survival simulation video game with some role-playing and adventure game elements. The player takes control of Philip Kindred, a man with no memory who wakes up in a Cryogenic Lab to an apocalyptic Michigan. He sets out to explore the world, and uncover of his forgotten past. But first, he has to stay alive, since everything around can and will kill him.

. A spaceship sim game set in the same universe, Ostranauts