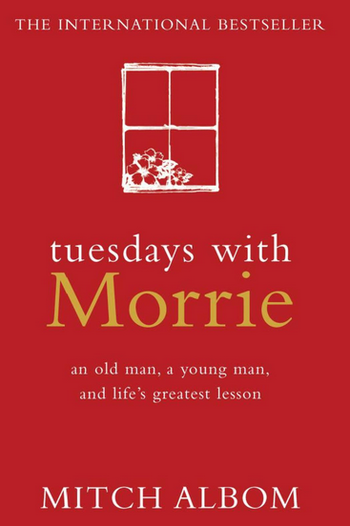 An old man, a young man, and life's greatest lesson.

Tuesdays with Morrie was written by Mitch Albom. It is the true story of the author's relationship with his favorite professor from college, Morrie Schwartz.

When Morrie was diagnosed with ALS, also known as Lou Gehrig's disease, he did not despair over it. "Instead, he would make death his final project, the center point of his days...Morrie would walk that final bridge between life and death, and narrate the trip."

For years Mitch Albom had nearly forgotten his college days and his favorite college professor. Then one night, while he was flipping through the channels on TV, he saw Morrie being interviewed on "Nightline." Mitch Albom decided to visit his old professor, and he and Morrie began meeting regularly, on Tuesdays, to talk about many topics, including:

Tropes used in this book include: