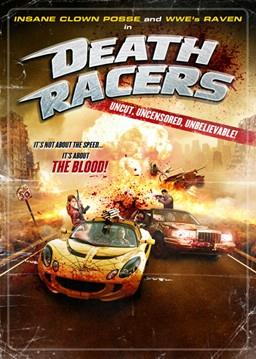 A very obvious cash-in of Death Race that ironically has more in common with Death Race 2000 than the "official" remake, which was Darker and Edgier than Death Race 2000. This one is more reliant on over-the-top, fucked up comedy (it also has strong influences from Grindhouse, particularly Death Proof). Death Racers stars Insane Clown Posse and pro wrestler Scott "Raven" Levy.

The story takes place three years after a civil war erupted, the United States declared martial law, and an entire city was turned into a massive prison camp. Levy plays a terrorist who plans to release sarin into the country's water supply. The state's governor holds a "death race" within the prison, promising freedom to the team that brings the terrorist back, dead or alive.