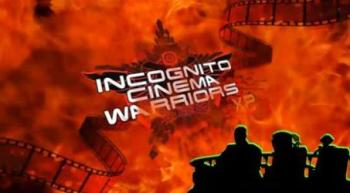 Incognito Cinema Warriors XP — ICWXP for short — is a show which debuted on DVD in 2008, and as of 2011 is becoming a series of videos-on-demand. Somewhere between Sketch Comedy, improv, and late-night movie anthology, it shows some of the worst films imaginable — or at least the kind of crappy B-movies an underfunded independent production can afford the rights to — intercut with framing sequences following the life of Rick Wolf (Rikk Wolf), a member of a zombie-fighting military branch known as CORPS, who takes refuge in the "Cine-A-Sorrow Theater" and is trapped there by mad scientist Dr. Harrison Blackwood (Rob Atwell, a reference to the hero of the 1980s TV show adaptation of War of the Worlds.). During the movies, Rick, Topsy Bot 5000 (Atwell, later Gregory Wyatt Tinnen, LATER later Nick Evans), and Johnny Cylon (Zach Legler), two robots Blackwood created to run the theater, mercilessly riff on the comically low quality, portrayed in "Shadowrama" as they sit in the balcony of a theater showing the movies.

In spite of its borrowed premise (Blackwood mentions he got the idea for torture-by-movie from an old cable show), it does stray from "that other show" in some places, being explicitly not aimed at young audiences (there's a warning that it may not be appropriate for those under 13 on the back of the box) and tackling films with more "mature" content than the MST crew usually saw.

The show has been evolving remarkably quickly. The first episode featured a laugh track during the host segments, which was swiftly dropped in time for the second. By episode three, the show had introduced Professor Zedekiah "Zed" Logan (Rob Atwell, later Nick Evans), a sophisticated sentient zombie head (that still craves human flesh), and episode four saw the replacement of Blackwood and the swift introduction of a new villain Jonathan Kincaid (Tinnen) and an accompanying story arc. And this is all in the first four episodes.

As of season two, the show has switched to a half-hour format, riffing shorts rather than entire movies, with a much quicker production time and a stronger emphasis on story. Although, they plan on riffing a feature-film for the Season 2 finalenote Originally meant to be Starcrash but upon discovering their inspirations, Mystery Science Theater 3000, were planning to use it for Season 11, they planned to switch it to Slipstream, although the actual film is still unconfirmed. Sadly, it has also been confirmed

that Episode 206 will be the final episode of the series, citing the movie-riffing landscape changing since 2008 and the legal gray-area of using public domain media. While Episode 206 is still planned for release, there has been no updates on it and no updates to the series since 2017.

and most of Season 1 was also available as VOD downloads at RiffTrax but have since been removed. They also have a YouTube channel dedicated to Let's Play (called Let's Roasts) called Robot Co-Op

. Although, they have since transitioned to Twitch streaming.