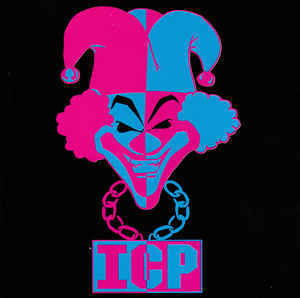 You can't fuck with the Juggla

Carnival of Carnage is Insane Clown Posse's 1992 debut album and the first Joker's Card. It marked the change from the Gangsta Rap Inner City Posse to the Wicked Clowns. The concept is that if nothing is done to repair the inner cities, the violence of the ghettos will be visited on suburbia. The album sold a mere 17 copies on its day of release, which led to the band turning the number into a Running Gag.

It is one of only two Joker's Cards to not feature the word Juggalo in the lyrics, the other being The Wraith: Hell's Pit, for completely different reasons. It isn't on Carnival Of Carnage because ICP didn't have enough of an audience yet to make it worth the effort to name them, and it's isn't on Hell's Pit because, as Violent J said on the "Seminar" DVD included in some editions of The Wraith: Shangri-La, "I don't want to see any Juggalos in Hell's Pit.''

You can find the basics at The Other Wiki