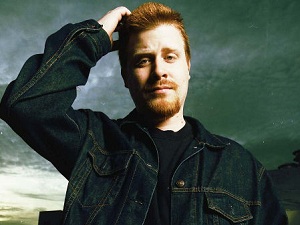 El-P (born Jaime Meline, born March 2, 1975) is a rapper hailing from New York City. He's been active since 1993 and is known for being in the groups Company Flow, The Weathermen, and Run the Jewels, as well as for his solo material. He also founded the label “Definitive Jux”, which itself is well-known for signing artists like Aesop Rock, Cannibal Ox, and Cage.

El-P is a rapper and producer, and he's well known for both aspects. His rapping is characterized by being dense, aggressive, and manic, while at the same time employing complex metaphor, allegory, and wordplay. He often verges into outright science fiction in his songs (Philip K. Dick is a big inspiration of his), and even when he's relatively down to Earth his lyrics still feature dark and gritty imagery. His production is known for its bombastic, dystopian sound, with heavy use of dramatic synthesizers and lo-fi machine-like drum samples.

He's also released several instrumental collections, such as High Water (A collaboration with jazz musician Matthew Shipp), Collecting The Kid (various unreleased odds & ends), and his Weareallgoingtoburninhell mixtapes (featuring instrumental versions of the songs on his solo albums as well as a few original instrumental works).

He should not be confused with Emerson, Lake & Palmer, whose lengthy band name is often shortened to "ELP".