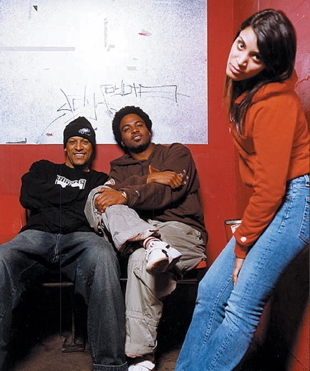 They be to rap what key be to locknote From left to right: Craig "Doodlebug" / "C-Know" Irving, Ishmael "Butterfly" / "Ish" Butler and Mary Ann "Ladybug Mecca" Vieira
In the east I rose
Froze in the pose
Of a land diseased
Flows that cooler summer breeze
- "Black Ego"
Advertisement:

Digable Planets is an American hip hop trio formed in 1987. It is composed of rappers Ishmael "Butterfly" Butler, Mary Ann "Ladybug" Vieira, and Craig "Doodlebug" Irving. They would come together when Ishmael met Mary Ann while attending college in Massachusetts. The two later hooked up with Craig, in Washington, D.C., whom of which Ishmael had prior interaction with. Having met him while he was rapping for another rap group called the Dread Poets Society. They would soon start recording together and their first single, "Rebirth of Slick (Cool Like Dat)," released on Pendulum Records, hit the R&B Top Ten while their debut, Reachin' (A New Refutation of Time and Space), was a critical and commercial success.

They would later follow this record up with Blowout Comb, which saw them changing their previous style of stream of consciousness lyrics backed by jazz samples to cryptic, Afrocentric lyricism backed by session musicians. It would also see them abandoning the insect themed imagery of their previous record, with them even changing their rap names ("Butterfly" (Ishmael) would become "Ish", "Ladybug" (Mary Ann) would become "Mecca" and "Doodlebug" (Craig) would become "C-Know"). However, after Blowout Comb, Digable Planets disbanded due to "creative differences".

All three continued making music separately, with Irving, now known as Cee Knowledge, releasing two albums under the name Cee Knowledge & The Cosmic Funk Orchestra. Vieira, now known as Lady Mecca, releasing Trip The Light Fantastic in 2005. And Butler would release Bright Black under the moniker Cherrywine in 2003, before going on to collaborate with multi-instrumentalist Tendai "Baba" Maraire to form the group Shabazz Palaces in the beginning of the 2010s.

However, just a few weeks shy of the ten-year anniversary of Blowout Comb, the three announced that they had reunited to record their third Digable Planets album. A compilation, Beyond the Spectrum: The Creamy Spy Chronicles, filled the gap while fans waited for its release, until they broke up yet again in 2011. Despite this, Digable Planets held a reunion tour during spring and summer 2016. Following up with a live album entitled Digable Planets Live in late June 2017.