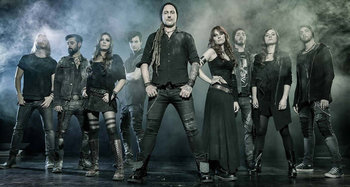 Eluveitie (el-VAY-ti) are a Swiss Folk Metal band. Eluveitie blends elements of Melodic Death Metal with Celtic folk music, all with a pagan theme. As far as folk metal bands go, they are a fairly well known and well established act, having released 8 full length studio albums since 2006. One of them, Slania (2008) charted in Switzerland and Germany.

O bright sun of the night, I lift my tropes up to thee...