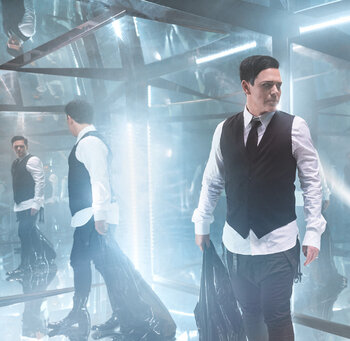 Across the oceans in my mind / Across the skies I left behind / A land of opportunity / A land to fill my destiny
Advertisement:

Emigrate is an industrial metal project formed by German guitarist Richard Z. Kruspe in 2005, in order to have an outlet for his need for artistic control that was causing conflict within Rammstein. In his own words, "Emigrate was formed to balance myself out to cure myself to go back to Rammstein and be back at the top of my game." Emigrate isn't so much a band with a steady lineup, but a collective title for Richard's work with his friends and guest artists (such as Jonathan Davis, Peaches, Cardinal Copia, and Marilyn Manson, among others).