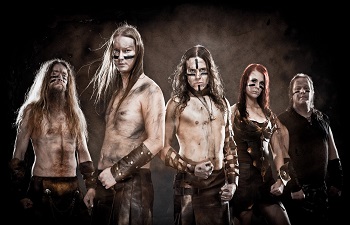 Ensiferum are a Viking metal band from Helsinki. Their original members were Markus Toivonen, Sauli Savolainen and Kimmo Miettinen. Not long after forming, they were joined by original frontman Jari Mäenpää, who became one of the band's principal songwriters. They recorded several demos and went through several lineup changes before finally releasing their self-titled debut album in 2001. This was followed three years later by Iron. These two albums are considered by some to be the band's "golden age".

After Iron was finished, Jari Mäenpää was forced to leave the band due to a scheduling conflict between the tour for Iron and the recording sessions for his side project Wintersun's debut album. He was replaced by Petri Lindroos of Norther. They went on the record an EP, Dragonheads, which contained some new songs as well as a couple of songs originally from their early demos. Three albums, Victory Songs, From Afar and Unsung Heroes, have come after that. They've been well-received, but a substantial portion of the fans insist that the band sucks now that Jari's gone.