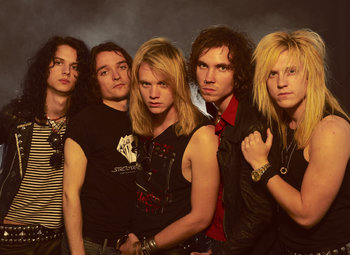 Formed in Arvika, Sweden in 2004 by Olof Wikstrand (vocals, all instruments) as a side project while he was in various local bands (most notably Tribulation), the band was initially not a particularly serious venture, though the songs that he had recorded started to make the rounds on MySpace, and by 2006, he had started to assemble a full band, with his younger brother Jonas joining in on drums and Adam Zaars taking the guitar spot, while Olof took over bass duties. The band then briefly changed musical chairs with the lineup in 2007, when Jonas switched to the bass spot as Jakob Ljungberg briefly (apparently only for a few months) joined in on drums before leaving again, leaving Jonas to resume drums, while Joseph Tholl took the bass spot. An appearance on the Speed Kills... Again split and a deal with then-upcoming indie label Heavy Artillery Records that year helped break them to a wider audience, and by 2008, the band had recorded Into the Night, their debut on Heavy Artillery. At some point between recording and release, Joseph Tholl moved to guitar and Tobias Lindqvist took over on bass, giving the band a five-man lineup. They would go on to tour in support of the album (including a North American run with Cauldron), and by 2010, they released Diamonds, their sophomore full-length, to rave reviews, and the quiet hype that they had previously had turned into broader mainstream recognition. Adam Zaars left the following year to focus on Tribulation, whose own career had slowly started to take off, and Olof simply opted to take the vacant guitar slot himself. Over the course of 2012, the band continued to tour, and while the collapse of Heavy Artillery and subsequent consolidation of most of its acts into Earache may have slowed them down somewhat, they managed to ink a more desirable deal with Nuclear Blast instead, and Death by Fire, their third full-length, was released in early 2013. They would continue touring throughout 2013 and 2014, and 2015 brought the surprise announcement of Undying Evil, their fourth full-length, as well as their first North American tour in seven years, which was slated for the beginning of 2016. Their coheadliner with Warbringer wound up being quite successful, as was a run supporting Dark Tranquillity later that year, but they opted to take a break for most of 2017 and 2018 to work on their next album, and in April of 2019, Zenith was finally released, while Joseph Tholl formally left after having been absent from touring for some time and was replaced by Jonathan Nordwall. More touring is planned, and Olof and co. have no intention of slowing down any time soon.