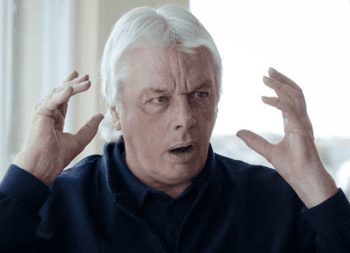 David Icke (last name pronounced the same as "Ike"note  and often intentionally mispronounced as "icky") is a prolific British author who believes that international finance and governments are run by interdimensional lizards who subsist on human suffering. He started his career as a goalkeeper for Coventry, retired young due to injuries and arthritis, spent several years as a successful BBC sports presenter, briefly claimed to be Jesus, or something of that sort, and then returned to his senses and started writing on the conspiracy by Half Human Hybrids in our governments and banks to keep us all slaves of extradimensional lizards.

His published books include:

Though David Icke is all but ignored by the mainstream, his theories have inspired many cult film and comic hits. The Invisibles retains much of Icke's cosmology and terminology, and The Matrix shows some clear influences from both (Icke published a book named Children of the Matrix after it came out to capitalize). Ultimate Marvel's version of the Skrulls, the Chitauri, are taken from Icke's theories. Though theories about Ancient Astronauts go back as far as 4000BC in the Rig Veda, Icke has revitalized the genre. References to his works are pervasive on conspiracy and UFO forums. MetaHistory.org

raises it almost to the level of religion, weaving Ickian (Icky?) cosmology with ancient Christian Gnosticism. More recently, he has been on This Morning and London Live, landing both in deep shit with Ofcom since he spread misinformation about the COVID-19 pandemic that had resulted in arson attacks on communication infrastructure.

He also has made numerous DVDs and hundreds of hours of radio programming. His personal website can be found here

, but be ye warned - here there be dragons Reptilians.

His works include examples of: