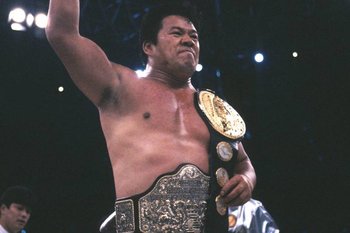 The Dragon of New Japan
"I always wanted to be the great wrestler that Tatsumi Fujinami was."
— Bret Hart
Advertisement:

Tatsumi Fujinami (b. 1953) is a Japanese professional wrestler known for his work in New Japan Pro-Wrestling. He debuted for Rikidozan's Japan Wrestling Association and became Antonio Inoki's protegee, eventually following him to form NJPW. Fujinami was then sent abroad to hone his skills, which included a travel through Mexico and a championship tenure in World Wrestling Federation, and upon his return he became to the junior heavyweight scene of NJPW just what Inoki was to the heavyweight one. In 1981, after a successful cruiser career, he was moved to heavyweight in order to left space to his sucessor Satoru Sayama, and by doing so he started some important feuds with Big Van Vader and Riki Choshu. After many years of consistent wrestling, he was turned into NJPW president, but this only lasted five years due to the then convoluted politics of the company. In 2006, when his feud with Riki Choshu reached its highest real life overtones, Fujinami left NJPW to form his own company, Muga/Dradition Pro Wrestling. He has been a presence in indy wrestling since.