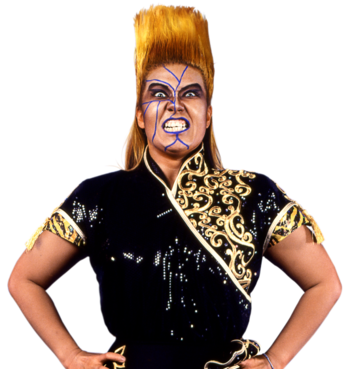 It's too late to run now; she's seen you.
Advertisement:

Keiko Nakano (born January 8, 1968), better known as Bull Nakano, is a former professional wrestler. She began competing in 1983 under the Bull Nakano ring name as a teenager in All Japan Women's Pro-Wrestling as a heel, went on to hold several of AJW's singles and tag team championships and briefly entered the WWF's Women's Tag Team division with Dump Matsumoto. AJW began to phase her out in 1992 as she returned to North America to compete in Mexico's CMLL, becoming its first World Women's Champion, though Nakano made return trips to AJW with her new belt, including two successful defenses against Akira Hokuto and Yumiko Hotta. In 1994, she made her way back to the World Wrestling Federation (WWF), where she feuded with Alundra Blayze over their Women's Championship belt. After reigning as champion once following another return trip to Zenjo, she switched to competing in World Championship Wrestling (WCW), where she continued her feud with Blayze, who had returned to her older ring name, Madusa.

She's also had memorable appearances in Frontier Martial-Arts Wrestling, LLPW, JWP, Jd' Star and New Japan. Nakano unofficially retired from professional wrestling in 1997 to pursue a career in golf, though continued to take the occasional booking until her official retirement in 2012.