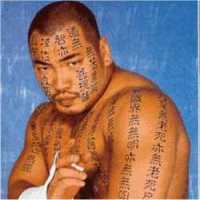 "Namu amida butsu."
"Hakushi (Jinsei Shinzaki in Japan these days) was actually quite the breath of fresh air in 1995, getting over without speaking English or wrestling WWF Main Event Style. This of course was far too threatening to those on top and he was crushed by The Kliq as a result."
—Scott Keith at this article

Jinsei Shinzaki (born December 2, 1966, real name Kensuke Shinzaki) is a Japanese Professional Wrestler and promoter, best known for his work in Michinoku Pro Wrestling. Originally an actor and highschool wrestler trained by Gran Hamada as part of his Universal Lucha Libre project, Shinzaki debuted in pro wrestling as a masked named Mongolian Yuga, but he got his true beginning after following his friend The Great Sasuke to his new company. He re-debuted in Michinoku Pro Wrestling as Jinsei Shinzaki, a wrestling Buddhist pilgrim who brought a spiritual light to the discipline we know as lucharesu. For years he was a small yet vital part of the Japanese wrestling scene, so much that he was caught by the World Wrestling Federation and switched to the mystical character Hakushi. He brought some Japanese style wrestling to the American company until his inane return to his country. After his return, Jinsei worked in building relations among M-Pro and other companies, appearing in New Japan Pro-Wrestling, All Japan Pro Wrestling and Frontier Martial-Arts Wrestling with several all star names. In 2003, he was made president of M-Pro when Sasuke went to politics, and he became instrumental in leading the promotion toward new times with Último Dragón's aid, just like he had been led in his pilgrimage around the professional wrestling. Currently, he remains as Michinoku Pro' big figure, as well as co-founder of joshi promotion Sendai Girls' Pro Wrestling along with Meiko Satomura.