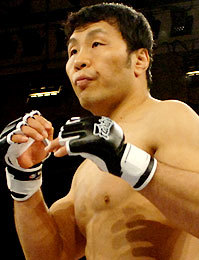 The Beautiful Beast.
"When making a case for world's toughest fighter, don't forget to include Hiromitsu Kanehara. This MMA veteran has fought for promotions throughout Japan including RINGS, Colosseum 2000, and Free Fight. Though his record is not impressive, Kanehara's list of opponents reads like a who's who of mixed martial arts champions and legends."
—Kanehara's PRIDE website profile
"To kill or to be killed. That's what is fighting for me."
—Hiromitsu Kanehara
Advertisement:

Hiromitsu Kanehara (b. 1970) is a Japanese professional wrestler and Mixed Martial Arts fighter. He first became known as a bright neophyte in UWF International, beating future stars left and right, but soon would be known for loving fighting at least as much as pro wrestling. A training fanatic, he got to be sent to Thailand to learn Muay Thai, asked to compete in shoots instead of works every time he was allowed, and ended up leaving the offshoot promotion Kingdom to join Fighting Network RINGS where he could show his skills. He became the promotion's workhorse and started taking on literally any opponent they threw at him, often being RINGS's last hope when better fighters like Tsuyoshi Kohsaka and Kiyoshi Tamura were out. Kanehara would give impressive performances against a list of star opponents, and also famously reached the finals of the King of Kings Tournament, a feat few can boast of. When RINGS folded, Kanehara joined PRIDE Fighting Championship, where he once again fought a string of world level opponents before wandering out to the indy MMA scene. After an irregular late career, a consequence of battle wear and age, he focused to sporadic pro wrestling, finally retiring from competition. He currently works as an osteopath and yoga teacher, as well as an occasional wrestler.

"To Trope or To Be Troped"