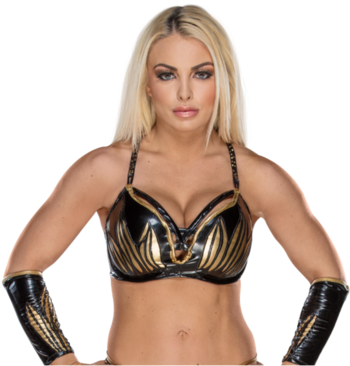 Amanda Rose Saccomanno (born July 18, 1990) is an American professional wrestler and former fitness and figure competitor. She is signed to WWE, where she performs on the NXT brand under the ring name Mandy Rose as the reigning NXT Women's Champion.

In 2015, she was a contestant in the sixth season of the WWE competition WWE Tough Enough, ultimately placing second, and was given a WWE contract. She would make her WWE main roster debut on November 2017 alongside Sonya Deville as the new associates of Paige, with the trio's name being revealed as Absolution. In April 2018, Paige retired from in-ring competition due to neck injuries, dissolving Absolution, but Rose would continue her alliance with Deville as the two remained a tag team. In late 2021, Rose moved back to NXT, forming the stable Toxic Attraction with Gigi Dolin and Jacy Jayne, capturing her first taste of pro wrestling gold in the NXT Women's Championship at the yearly Halloween Havoc special, while Jayne and Dolin won the tag titles for the girls, giving Toxic Attraction complete control of the women's brand.