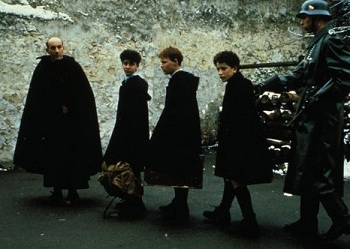 Au Revoir les Enfants (Goodbye Children) is a 1987 semi-autobiographical film by Louis Malle. Set in a small Carmelite boarding school in occupied France in the winter of 1943, it tells the story of the friendship between two young boys, one Catholic and one Jewish.

We meet Julien Quentin as he's reluctantly boarding the train from Paris to go back to school after the winter holidays. As everyone settles into the dorm Father Jean, the headmaster, introduces Jean Bonnet, a new student who gets the bed next to Julien's. As life in the Catholic boarding school settles into a routine punctuated by air raids, visits from the militia and black-market shenanigans, Julien starts noticing strange things about his new classmate. He starts snooping and eventually discovers Jean Bonnet is really Jean Kippelstein, and is Jewish. The two boys grow closer as Julien tries to learn more about Jean's life, and starts asking questions about what it is that's so terrible about Jews anyway.

The film is a fictionalized account of real events; Jean Bonnet, Father Jean and the other Jewish boys are all people Louis Malle met in school as a boy, with different names but the same stories. However he never did build a friendship with the boy Jean Bonnet is based on the way Julien did with Jean, and he's said in interviews that he always regretted this fact, which is why he made this film.

Most of the film is a fairly light Boarding School Slice of Life story, with commentary about life in France under the Occupation and The Holocaust thrown in. It got lots of awards and is quite popular in History classes in France and French classes abroad.