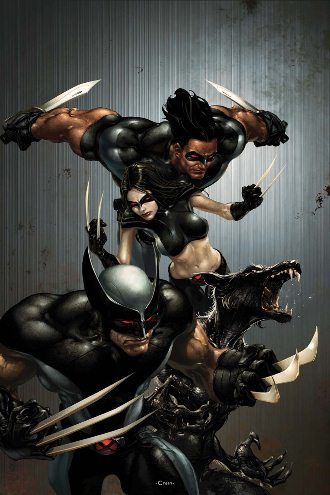 Darker and Edgier takes on a whole new meaning
Advertisement:

In early 2006, former X-Men: Evolution writing team Craig Kyle and Christopher Yost took over the teen team New X-Men, bringing with them their creation Laura "X-23" Kinney. They took that team through the aftermath of the House of M storyline and introduced The Purifiers, Reverand William Stryker's fanatical mutant-hating army of followers. After the cancellation of New X-Men, Kyle and Yost launched a third incarnation of X-Force as a black ops team sanctioned by Cyclops to combat The Purifiers in a way that the X-Men — who are trying to re-establish themselves as a respectable, law-abiding superhero team - never could. He puts Wolverine in charge of the new group, with members James "Warpath" Proudstar, X-23 and Rahne "Wolfsbane" Sinclair, and the team is soon joined by Warren "Angel/Archangel" Worthington, Neena "Domino" Thurman and Josh "Elixir" Foley.

Reaction to this series was extremely mixed, with the book consistently rating in the top 30 for monthly sales, but many critics seeing it as an example of Darker and Edgier taken to self-parodic lengths. The series lasted for 28 issues (April, 2008-September, 2010). It ended with the Second Coming crossover, which concluded one of the bigger plotlines.