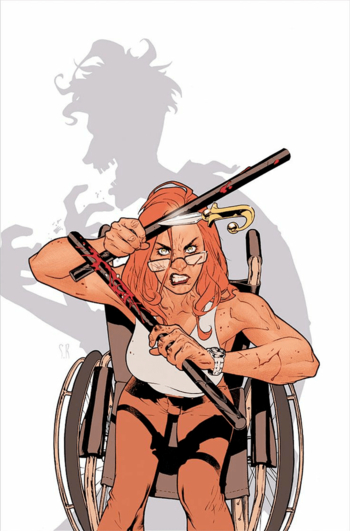 She doesn't need legs to kick his ass.
Fox marched forward. It really was hard to tell that he was blind. Coco watched him carefully, and even when he stumbled on a rock or a root, he quickly adjusted to maintain his balance without missing a beat; you had to be looking to even notice the misstep. Coco envied Fox's complete awareness of his body and how it moved in his environment.
— RWBY: After the Fall
Advertisement:

How can you make a Badass character even more badass? Easy; make him lose an eye, or have her get paralyzed from the waist down, or give them some disease from which there is no cure. Finally, do not use the Reset Button to remove it. "What?!" you say, "My character must stay injured/handicapped?" Simply, yes.

In Real Life, we know how hard it is to accomplish death-defying feats in perfect health and condition, so anybody that does it with a handicap instantly earns our respect. Imagine how much more awesome that shoot-out is going to be when the audience finds out The Hero is blind. Imagine the buzz your character will get when they win the judo competition with just one good leg.

It is important that your character's conquest of their physical challenge makes sense; not properly explaining their ability to continue to function, let alone on the badass level, will result in audience confusion, or worse, your character becoming a Sympathetic Sue.

For the sake of the story, a restrained dose of Applied Phlebotinum is allowed to explain or aid the character's ability to overcome the handicap. This technological or otherwise nonstandard aid cannot completely cure or nullify the effects of the injury, though — that would kill the point of the character triumphing over the handicap. Thus, The Six Million Dollar Man wouldn't count. On the other hand, if the helping device has drawbacks that constantly remind the character of their issue, that's cool. For example, in Star Wars, Darth Vader's life support suit enables him to kick ass despite his extensive and debilitating injuries, but it's clunky and outdated by the standards of The 'Verse. Vader can't survive without it, and he still has to endure the constant pain of his old injuries (along with the incessant Vader Breath from that noisy respirator).

Some writers will go for extra points by showing how an injury unlocked the character's true potential by causing them to discover some heretofore unrealized skill or ability or learning a new one. A Training Montage might be in order to show how the character learned to overcome the handicap. If a person has powers because they are disabled, then that's a Disability Superpower. The Deaf Composer may go through a similar process regarding their chosen craft.

Mental challenges, such as autism spectrum disorder and PTSD, count as well. Old age doesn't (although it often overlaps with this trope), as that's already covered by tropes like Never Mess with Granny and Old Master.

This trope is commonly seen among fictional pirates. These attributes seem to be cases of Follow the Leader: the Seadog Peg Leg originated with Long John Silver of Treasure Island,note although in the book he had a crutch, not a peg the Hook Hand with Captain Hook of Peter Pan, and the Eyepatch of Power …well, that might have come from Real Life Arab pirate Rahmah ibn Jabir al-Jalahimah,

but it might also come from something that has nothing to do with disabilities. Some people have speculated that sailors wore eyepatches to keep one eye in the dark, so when they went into the darkness below deck, they'd have one eye accustomed to the darkness, and they'd just switch the patch to the other eye.

Specific Sub-Tropes include Blind Weaponmaster, Blind Seer, and Deaf Composer. The Blind Black Guy usually fits this trope (and is usually based at least partially on Ray Charles or Stevie Wonder). In the case of a villainous Handicapped Badass, like the aforementioned Vader, Silver, and Hook, this trope will also overlap with Evil Cripple.

This trope is often seen in Real Life among people who don't accept the Dream-Crushing Handicap as the final word. Of course, not everyone wants to follow this trope and be "inspirational". Instead, they'd rather go about their lives, maybe with (God forbid) a few accommodations. On the bright side, at least it isn't vomit-inducing pity. Compare Pregnant Badass. On the more intelligent side, compare Genius Cripple, and if both of these tropes overlap with each other, you'll get Genius Bruiser. Contrast this trope to Disabled Means Helpless.

The Long John Silver of Treasure planet, has not only a robotic peg leg, but a robotic arm and a cyborg eye. All of which come in handy in his line of work as a pirate and chef.

The Long John Silver of Treasure planet, has not only a robotic peg leg, but a robotic arm and a cyborg eye. All of which come in handy in his line of work as a pirate and chef.